This artwork comprises a single monumental mason’s compass cast in Bronze which is frozen in the act of drawing out a stone spiral. It is sited beside and is seen from the main rail line to London and will act as a Gateway sculpture. FSE made each individual component for the caliper with each one welded on. As well as this the base is joined together to give the illustion that the pin is holding everything up. The title of the sculpture comes from the use of the masons’ compass in setting-out the drawings and templates for the fine stone work carried out by the craftsmen who used to work for Rattee and Kett. The compass sculpture has three main references. Firstly it makes a strong statement about the former use of the site as a centre of hand crafted stone excellence that has kept the Cambridge Colleges looking their best over the years.

The work also refers to Newton, the star Alumni of Cambridge University who was often depicted holding a compass as he mapped the movement of planets by artists such as William Blake and by Eduardo Paolozzi in his statue to Newton outside the British Library.

Lastly the compass is also such an elegant and familiar tool that has been used for thousands of years. 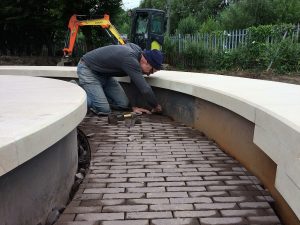